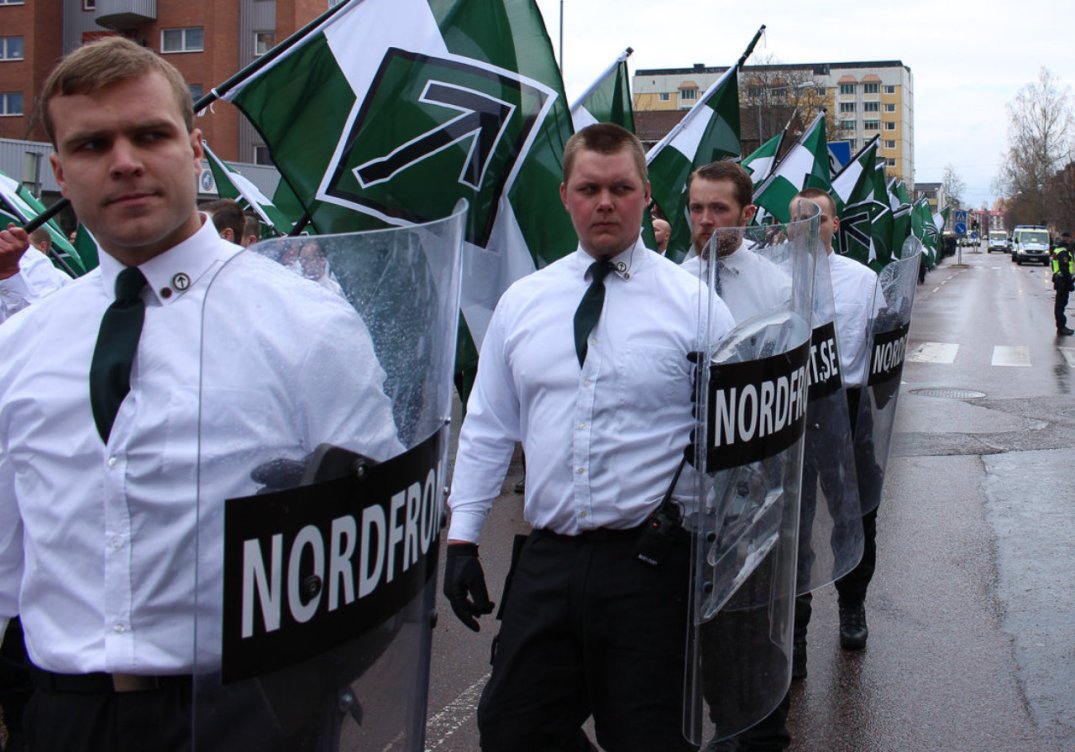 Most people weren’t surprised by yesterday’s Alternative für Deutschland landslide election, perhaps because we long since allowed extreme views in our own governing bodies, to such an extent that their views increasingly become our own, seen as the standard to which we’re all held.

Seen in light of this, Americans supporting a proto-fascist’s U.S. presidency, or Norwegians, securing another four years of xenophobic rule, should of course not be surprised by a German 12.6 percent AfD support. We should, however, be surprised that extreme views no longer surprise us. Maybe because «they» are now «us».

The German election received significant news coverage yesterday, as it should, regardless the outcome – granted with some attention to the extremist advance, although few bothered to raise an eyebrow (which is my real concern here).

The term «white shirts» is about to establish itself as descriptive of the white-shirt-clad neo-Nazi Nordic Resistance Movement, whose marching no longer affects or concerns us, lulled into the impression that it’s all as it should be, rendering even authorities on extremism fairly indifferent to their success.

Perhaps because said Nazis do not define themselves Nazi, and after all, we have to take their word for it, no?

In any event yesterday’s extremism is seen as today’s state of normalcy, and it should scare the living daylight out of us. Unfortunately, brought to a state of indifference, it does not. Furthermore and off the top of my head, I can think of only two groups rejecting the Nazi term used on modern-day Nazis: The moderate voices advocating dialogue over condemnation – and the Nazis themselves.

As mentioned in this blog on many an occasion, we often ask ourselves how the interwar Germans could possibly allow Adolf Hitler’s rise to power.

Photo: White shirts marching in Sweden (and increasingly, hardly noticeable, in our very own streets).

OK, so I know I posted this back in February, but you know … All things considered.

And in case you wondered. Yes:

Sorry for the lack of subtitles, but hope your German isn’t too rusty (happily it worked for me).

Also his (and I think we all know of whom we speak) inability to see the demagogic resemblance speaks volumes – rallying, not as part of a campaign, but as a brand «new» way of government.

This one’s worth every minute of your time. Plus actually fairly amusing, in spite of the gloomy backdrop.

Please understand that I’m not trying to offend anyone. I’m not saying that the 43.9 percent who voted NSDAP in 1933 knew what to expect.

You may ask yourself how the German Nazi party managed to rise to autocratic power, in spite of democratic branches of government in place, following Adolf Hitler’s 5 March 1933 federal election victory.

Considering current events, my immediate answer would simply be:

Who, in their right mind, would hesitate to compare today’s America with the Germany of 80 years ago?

My grandparents died at Auschwitz: parents told me how Hitler's publicity machine slowly made it possible. This is how. Constant repetition. pic.twitter.com/AHbs9HFidi

Don’t even have to call your newspaper Völkischer Beobachter!

We’ve all felt a strong sense of solidarity with the French in the aftermath of the attacks on Charlie Hebdo, Paris and Nice, coupled with a growing rage against the so-called Islamic state, ISIL.

The attacks on the birth place of liberty, equality and brotherhood, the model of modern Western civilisation, felt like an attack on us all, an attack, perhaps, on those very ideas, threatening to take it all away, rendering us anything but free, equal and fraternal.

Could they be about to succeed? Today’s news may serve as an indication:

Forcing us to wonder wherein the difference lies, between French police officers and Jew-harassing SA troops of the Third Reich. Granted the above depicted gendarmes simply carry out orders, as opposed to Hitler’s zealous stormtroopers. The outcome, however, remains the same: ethnic and religious harassment, for which the French, as much as the Germans (and the rest of us), should of course be ashamed.

I have, up until recently, been ambivalent to the proposed burkini ban, but that was until today’s Niçoise news reached us all.

The very thought of scenes such as the one just seen in Nice had me convinced that the ban is everything but libre, égal or fraternel, but the complete opposite.

Thank you, France, but no thanks.

This blog post’s top illustration, originally used in the wake of the Bataclan massacre, takes on a whole new meaning.

Je suis désolé, albeit for an entirely different reason altogether.